DOTr Warns Public About "In My Feelings" Challenge: '"Be Safe, Not Reckless"

It's also called the "Keke" or "Kiki" Challenge, but whatever name you call it, the Department of Transportation (DOTr) isn't mum about expressing its dismay over the "In My Feelings" Challenge. So much so that if you plan to do it, then prepare to be slapped with a possible PHP 5,000 to PHP 15,000 fine and a revocation of your driver's license. 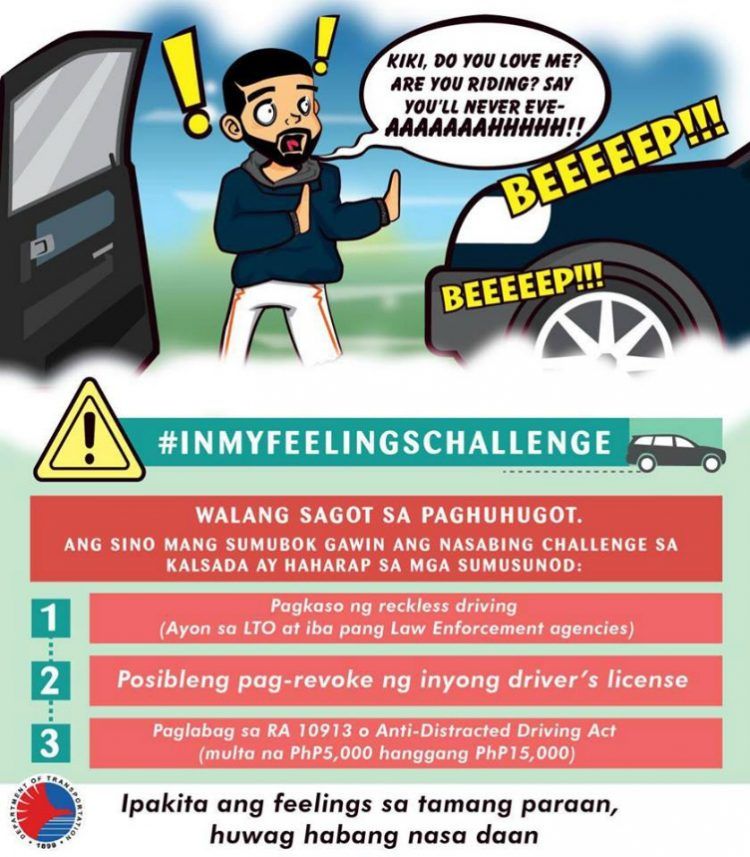 According to the Land Transportation Office (LTO), doing the "In My Feelings" Challenge on public roads is considered "reckless driving" and a violation of the Anti-Distracted Driving Act that has a PHP 5,000 to PHP 15,000 fine.

"Hindi man po namin mapipigilan ang lahat sa kanilang “expression of feelings”, tandaan na bawal po itong gawin sa mga kalsada, lalung-lalo na kung umaandar ang sasakyan at ikaw ang drayber! (While we can't stop the public from their "expression of feelings", remember it's prohibited in the streets, especially if it's a moving vehicle and you're the driver!)," the DOTr said in a statement.

How the "In My Feelings" Challenge Started

It all started with Drake's hit Scorpion album song "In My Feelings".

Last June 29, comedian Shiggy posted a video dancing (or "doing the shiggy" as he describes it) to this tune in his Instagram account. Shiggy's dance, which perfectly synced with Drake's lyrics, showed him making a heart gesture with his hands as Drake sang the line, "Kiki, do you love me?" He also made a driving motion with his arms during the song's line, "Are you riding?"

Since then, the dance spread like wildfire, even attracting the likes of politicians and celebrities like Will Smith, Ciara, Rachel Bilson and Ryan Seacreast.

Even animals like camels, dogs, goats and cows do the dance, such as this one:

The dance, which started harmlessly, has now inspired grandmas and even brides to dance to the lyrics, "Kiki, do you love me? Are you riding? Say you'll never ever leave from beside me," while their vehicles are moving.

This has led to many accidents on the road, with many participants getting run over by cars in attempting the "In My Feelings" Challenge. Others would trip themselves while performing the moves.

Still, there are also the more serious incidents, like a fractured skull that happened to one teen. There was even one incident where a woman was robbed while doing the dance.

Now in the Philippines

Considered a global phenomenon, this dance frenzy has now reached the Philippine shores, prompting the government to take action and warn the public of its dangers.

Their most recent Facebook campaign summed up the agency's sentiments about the challenge:

"Ipakita ang feelings sa tamang paraan, huwag habang nasa daan (Show your feelings the right way, not while on the road)," according to the advisory posted on its Facebook account: