Nissan 350Z for Sale in Philippines

May 17, 2021 - Currently, 2 Nissan 350Z for Sale in Philippines. Carmudi is your ultimate destination to find all new Cars (2) information, including Car specs, features, prices and images that will help you choose.

The Nissan 350Z is a sports car by Nissan. It was essentially the introductory model for Nissan’s new Z-car concept in 2002, or basically the redesigned 240Z concept in 1999. Produced from 2002 until 2009, the 350Z was part of the fifth generation of Nissan’s Z-car lineup of sports cars. In that span of time, the two-seat sports car accumulated several awards such as a spot in Car and Driver’s “Ten Best” in 2003. The 350Z was later replaced by the Nissan 370Z in 2009.

Nissan 350Z Review in the Philippines

The Nissan 350Z offered in the Philippines a few years ago was the fifth generation of Nissan’s Z-car line. It was basically the only model made available under the lineup. Sporting a 3.5-liter (VQ35DE) DOHC V6 gasoline engine, it delivered a maximum output of 280 hp at 6,200 rpm and a maximum torque of 363 Nm at 4,800 rpm. The engine with a 76 liters of fuel tank capacity was mated to either a 6-speed manual transmission or a 5-speed automatic transmission, and powered by a rear wheel drive.

Sometimes we find ourselves getting bored when driving alone, though it’s worse when we have someone else with us in the car. There’s this awkward tension that pops up every now and then to make our lives miserable. Good thing you can easily get rid of the boredom by music! Enjoy it with a friend or a lover – just pop in your favorite tune and blast it through six speakers to make your ride enjoyable. If you find yourself wishing to diffuse an awkward tension, the handy AM/FM radio shall come to your rescue. Who knows? The news you hear might spark a conversation. More than that, the Nissan 350Z is equipped with a slew of convenient features to ease your drive. These convenient features are:

It is always important to think about our safety, especially when we are on the road. Crimes are rampant everywhere and undisciplined drivers can cause mishaps for you and for others. Not to mention you cannot predict when and where unfortunate misfortunes can happen, which are caused by either human error or machine failure. With the frequency of road accidents today, all of us are going to need safety features now more than ever. With the Nissan 350Z, you can drive behind the wheel with a peace of mind. Some of the safety features of this car are:

Upon entering the interior of the Nissan 350Z Philippines, you’ll notice its charismatic and sporty vibe. The seats are swathed in leather, and the good thing is that you can choose an all leather interior in either black or burnt orange. It’s also packed with different interior features that aren’t only a sight for the eyes, but can also offer comfort. Such are the seats that can give a good support to make you comfortable in your ride. There’s one thing left for you to do: buckle up! Here are some other interior features of the Nissan 350Z:

There are probably a couple of cars with the combination of elegance and masculinity, and the Nissan 350Z is one of those we see today. While having an elegant and poised presence, the 350Z also maintains a manly appeal, thus exudes an overall suave finesse on the road. The bulge on its bonnet hides a powerful engine, and from the chinky shape of headlamp alone, it will remind you that it is indeed a Japanese car. Other exterior features are:

Since it is no longer offered on the official website of Nissan Philippines, the Nissan 350Z you see on roads today used Nissan 350Z cars. Here are the following 2nd hand Nissan 350Z prices in the Philippines:

Know more about Nissan 350Z price list in the Philippines 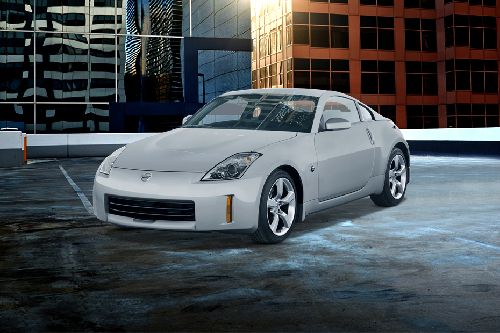