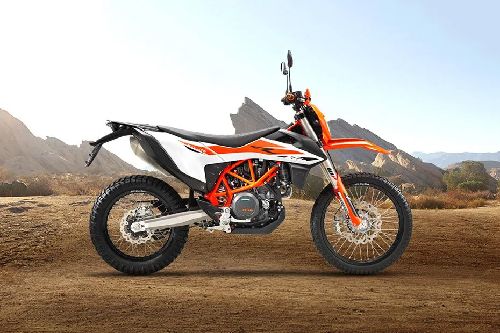 I am looking for KTM 690 Enduro R price in

The 2021 KTM 690 Enduro R was revealed last week. The Austrian manufacturer is known to make super-efficient dirt bikes and the Enduro R is the latest in the series. In the Philippines, the KTM 690 Enduro R comes with a 1-cylinder, liquid-cooled 654cc engine which produces 74 PS maximum power and 74 Nm peak torque. The motor is paired with a 6-speed manual transmission. The bike has appropriate lights to make the vehicle street-legal. Major features of the KTM 690 Enduro R include antilock braking, adjustable suspension, a fuel map selector, and a semi-digital instrument console. The KTM 690 Enduro R is priced at ₱790,000.

Get the better insights of KTM 690 Enduro R, Read our expert opinion and helps to buy or not

This bike can easily outbeat many of its rivals in the market with its upgraded suspension system and better electronics. Being a...

The KTM 690 Enduro R is a perfect street-legal dual sportbike. Receiving its power from an extremely efficient 693cc engine, the ...

Enjoy the most satisfying off road ride on this KTM bike

Cover miles through highway at a high speed when you can get an unique scope to ride a bike like KTM 690-enduro-r. Side by side, ...

The best dual sportbike for the streets

You don’t really find many street-legal dirt bikes, especially as good as the KTM 690 Enduro R. I have been riding the bike for m...

One of my favorite bike this is if you consider one with a big sized cylinder and is an adventure riding bike. The bike is just t...