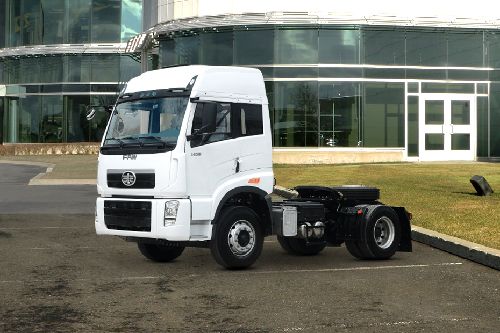 Checkout 340T6 price list below to see the SRP prices and promos available.

The FAW 340T6 is yet another powerful truck designed to offer last-mile connectivity and offers small business solutions to the lower segment of the economy. One of the most efficient offerings by the brands, the truck picks up one of the most rigid suspensions in its segment. Having a highly efficient fuel return as its major USP, the 340T6 also packs a sleek but modern interior with all the added amenities. Powering the vehicle is a six-stroke WP10.340E32 Turbocharged, Intercooled diesel engine which maxes out at a top speed of 103 km per hour. Additionally, it gets a dry slipper clutch for enhanced handling of the vehicle in different forms of terrains.

Get the better insights of FAW 340T6, Read our expert opinion and helps to buy or not

Not as reliable and technically advanced as European or Japanese rivals

A multipurpose truck that is versatile in its performance

As a tractor head truck, we use this model for many purposes. Sometimes, we use it as a head to pull our garbage truck, or someti...

A perfect strike of balance

I wanted a small tractor head truck which is both easy to drive and control in urban environments as well as on the longer runnin...