Toyota Tundra for Sale in Philippines

Jun 23, 2021 - Currently, 6 Toyota Tundra for Sale in Philippines. Carmudi is your ultimate destination to find all new Cars (6) information, including Car specs, features, prices and images that will help you choose.

Toyota boasts that the Tundra is built to do it all. And while we think that’s too far a stretch (hey, we all have weaknesses), what we do know is that it was built to be extremely tough. The Toyota Tundra is a full-size pickup truck manufactured by its Japanese manufacturers since 2000. It has a bigger frame than the Toyota Hilux, which is the more popularly sold Toyota pickup in the country today. We know that the new Toyota Tundra doesn't really need all the hype and publicity (really, they’re way beneath it), but we can't really help but toot its horn a bit. So instead of telling you its features, we'll just tell you its accomplishments: It was awarded "Truck of the Year" by Motor Trend Magazine both in 2000 and 2008, and was also named "Best Full-Size Truck" in 2000 by Consumer's Report - The car's design is the first of its kind to ever have been approved outside of Japan. What's more, the Tundra's content and materials are 75% made from America - It has been awarded IIHS Top Safety Pick, and built using Toyota's STAR safety system - This car is extremely powerful. Toyota Racing Development (TRD) created a supercharger that boosts Tundra's 5.7L V8 engine. It can go from 381 hp and 401 ft/lbs of torque to a whopping 504 hp and 550 ft/lbs of torque! No wonder it has built a great legacy in NASCAR's truck series, bagging titles in 2006, 2008, and 2010 - In 2016, Victor Sheppard of Louisiana drove over 1,600,000 million kilometers on his 2007 Tundra. Because of this, Toyota gave Sheppard a 2016 model in exchange for his old truck which will be disassembled and studied - Still doubtful about how powerful it is? In 2012, the Tundra successfully towed the Space Shuttle Endeavor to the California Science Center in LA. Its weight was a gigantic 292,500 lbs! And to think that the Tundra only weighs 5000-5900 lbs is pretty remarkable!

Available as regular cab, double cab SR, CrewMax, 1794, Platinum, and CrewMax SR5, the Tundra has a tiered approach in terms of packaging as it is offered in multiple variants fit for both personal and commercial needs. The new 2016 Tundra is primarily distributed in the U.S., Mexico, Panama, Canada, Bolivia, Honduras, Chile, and the French territory of New Caledonia. It also has gray imports to Japan, China, the Middle Easy, Switzerland, and Australia. Unfortunately, it’s not sold by Toyota Motors Philippines as part of its lineup, but the good news is that fans of this monster vehicle can content themselves with used Toyota Tundras while waiting for models to come to Philippine shores. The Toyota Tundra Philippines is oozing with power and is equipped with some of the meanest features out there. It competes locally with nameplates such as the Dodge Ram, the GMC Sierra and the Ford F-150.

Toyota Tundra 2016 in the Philippines

The new Toyota Tundra has now updated all the stereos in all its 2016 models, running on Toyota's Entune 2.5 audio system. This enhances the sound quality even better. Also new on the line is a 38-gallon fuel tank to the Limited, TRD Pro, 1794, and Platinum and a standard integrated trailer brake control.

What is new about the Toyota Tundra 2016 design?

The car's design is anything but dainty. In fact, its ruggedness and bold styling is not for the faint of heart.  Some of the much-needed upgrades to the interior were made in 2014, so only light tweaks were done in the new 2016 Tundra, with its interior style now following the lead of its mainstream competitors.

What are Toyota Tundra 2016 specs and features?

The 2016 Toyota Tundra is offered in various body styles, bed lengths and trim levels (Platinum, 1794, SR, SR5, TRD, Off-Road, and Limited), although the Platinum trim is the only one available in the Philippines. The V-6 engine has been dropped in 2016, and the only engine used is the V-8. Whatever the case, it’s still a powerful car.

What are Toyota Tundra 2016 prices in the Philippines?

A  new Toyota Tundra 2016 has a price range of around P4,000,000 to P4,800,000, subject to its variant and trim level. Remember that this model is only sold here as a used car in the country, so prices may not be consistent compared with the brand new models. If you want, just import from nearby countries like Japan and China.

Toyota Tundra Review in the Philippines

Our only complaint with the Tundra is that it's not fuel-efficient. In fact, it's quite a gas-guzzler. It was rated below-average in EPA ratings across the lineup, so think twice buying it if you can't bear to part with your pesos for a bit of fuel. Here is a list of some popular Toyota Tundra years and their fuel consumption rates.

The V8 engine offers spectacular driving on the road, with great speed when not burdened by too much heavy load and towing limits. This truck is best driven on Metro streets, with comfortable seats that make driving truly a pleasurable experience.

The Tundra offers really good safety equipment, with crash-test scores that have significantly improved compared to the 2015 model.

Ten years on, and the aggressive, shark-like snout still looks bold and daring. The more updated chunky sheet metal has crisper edges and a low leaning stance that give it a nice sense of proportion.  It definitely looks better compared to its previous predecessors.

This car has a wide stance and bold, in-your-face grille that gives and industrial vibe to the car's appearance. The front end's chiseled contours is surrounded by chrome, and the amount varies on the trim level. Whatever the case, we suggest you choose darker colors to make the chrome pop out well.

The new Toyota Tundra models are available in the following colors:

A 2nd hand Toyota Tundra for sale has an average price tag of below P2,000,000 for first generation models (2000-2008), depending on its general condition and mileage. A 2nd hand Tundra has an average price tag of P2,500,000 to P3,000,000 for second generation models (2008 to 2013) subject to the location of the dealer and the pickup’s state. Below are the average prices of popular new and second hand Toyota Tundra models:

New Toyota Tundra in the Philippines

Know more about Toyota Tundra price list in the Philippines 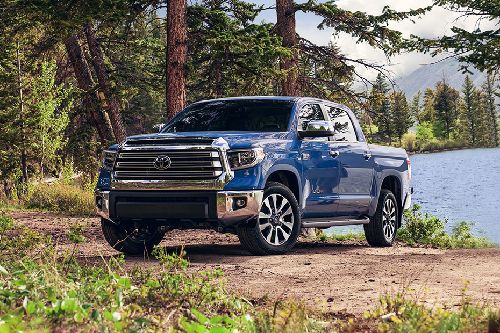