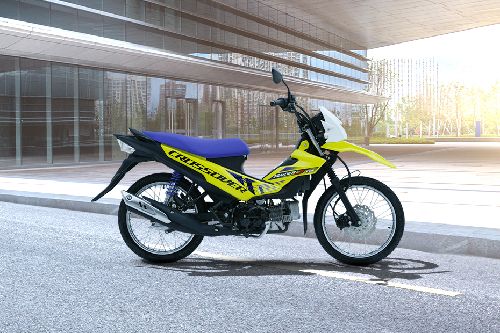 I am looking for Suzuki Raider J price in

The Suzuki Raider J Crossover was launched in the Philippines at the beginning of 2020. It’s the Japanese manufacturer’s newest dual-purpose underbone two-wheeler. It has been specially built to tackle off-road terrains. The bike is equipped with a 1-cylinder, air-cooled 113cc engine, which produces 9 PS maximum power and 9 Nm peak torque. The engine is paired with a 4-speed manual transmission. Major features of the vehicle include a 4-litre fuel tank, 17-inch wheels, telescopic fork front suspension, wide motocross-type handlebars, and color-injected resin model fairings, kick and electric start, and a pass switch. Available in a single version, the Suzuki Raider J Crossover is priced at ₱63,900.

Get the better insights of Suzuki Raider J Crossover, Read our expert opinion and helps to buy or not

Lack of power at higher RPMs

Due to numerous reasons, I decided to opt for this version of the Suzuki bike this time. The first and foremost aspect, which all...

Combination of motocross and underbone

When I saw the Suzuki Raider J Crossover for the very first time, for a moment, I got confused if it was a motocross bike or an u...

For the tough roads

In the present generation, the Suzuki Raider J Crossover is a sturdy bike that has been specially designed for tough roads. I...

The local motorcycle arm for Japanese marque Suzuki wants to make sure that you will not just ride in style...