Nissan Altima for Sale in Philippines

Jun 18, 2021 - Currently, 2 Nissan Altima for Sale in Philippines. Carmudi is your ultimate destination to find all new Cars (2) information, including Car specs, features, prices and images that will help you choose.

The Altima has certainly endured many iterations over the years. Starting out as a compact car with upscale leanings, the Nissan-built car has evolved into a confident midsize family sedan with innovative styling and sporty handling, replete with stellar fuel economy and a serene, relaxing cabin. In the process, it has become of the top marques of its class, and for good reason.

Nissan introduces a heavy update for the 2018 Altima. Apart from the changes in design, the latest Altima also comes with a new suspension, revised steering and a host of new infotainment features. If there’s any question out there suggesting that the Altima doesn’t have what it takes to compete with today’s midsize sedans, the new updates should be enough to silence them.

Nissan Altima 2019 Review in the Philippines

It’s only been three years since the Altima’s last full redesign, and already, Nissan is unveiling more than a few significant changes to their flagship sedan. Updates to the 2018 Nissan Altima include:

What is new about the Nissan Altima 2019 design?

Nissan claims that the Altima’s mid-cycle update is one of the biggest makeovers that the company has done that doesn’t involve introducing a new generation. Among the car’s updated styling cues are:

What are Nissan Altima 2019 specs and features?

Nissan offers the Altima in two engines—a 2.5-liter for the base model and a 3.5-liter V6 for the top spec. CVT is the only transmission available. Standout features for the latest model include:

What are Nissan Altima 2019 prices in the Philippines?

According to the official Nissan Philippines website, the price for the latest Nissan Altima starts at P1,650,000. Two plush trims are on offer for 2018, with the MSRP for each being listed below:

Nissan Altima Review in the Philippines

The Altima’s 2.5L engine is good for 182 hp and 243 Nm, while the 3.5L delivers 270 hp and 340 Nm. Top speed for the vehicle is 235 km/h, while 0-100 km/h can be achieved in a short 7.2 seconds. The vehicle’s suspension, steering and transmission have all received an upgrade for 2018, and the result is a nimbler, quieter car. Fuel economy scores are stellar in the new Altima, and Nissan attributes this gain to smoothed underbelly, well-chosen aerodynamic add-ons, and an active grille shutter.

Plenty of professional car reviewers think that the latest Altima has one of the better interiors in its class due to its tasteful design, straightforward controls and outstanding insulation. Ample legroom for both front and rear occupants are a joy to behold. Standout creature comforts for the vehicle include:

Nissan takes a comprehensive approach to safety with the Altima via its Nissan Safety Shield system, which comes packaged with the following features:

Those who have seen the new Altima up close noted the vehicle’s sophisticated styling, easy-to-use controls and excellent noise, vibration and harshness (NVH) protection systems. Build and quality of materials are outstanding, according to many critics. Standout interior features include:

The Altima’s exterior goes through an extensive update for 2018. So extensive in fact, that those who think this is another generation altogether can’t be faulted. Key exterior features for the new Altima include:

The Altima is Nissan’s flagship sedan, so naturally, the Japanese carmaker made sure that the Altima only comes in the classiest color choices. These are:

Nissan Altimas are known for their high resale value. As such, it’s not unusual to find a 90s Altima that still costs around P100,000. Below are some of the prices to expect from Nissan Altimas sold by new or used cars for sale dealers all over the country:

Know more about Nissan Altima price list in the Philippines 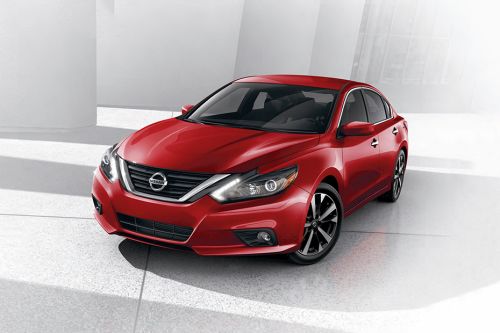