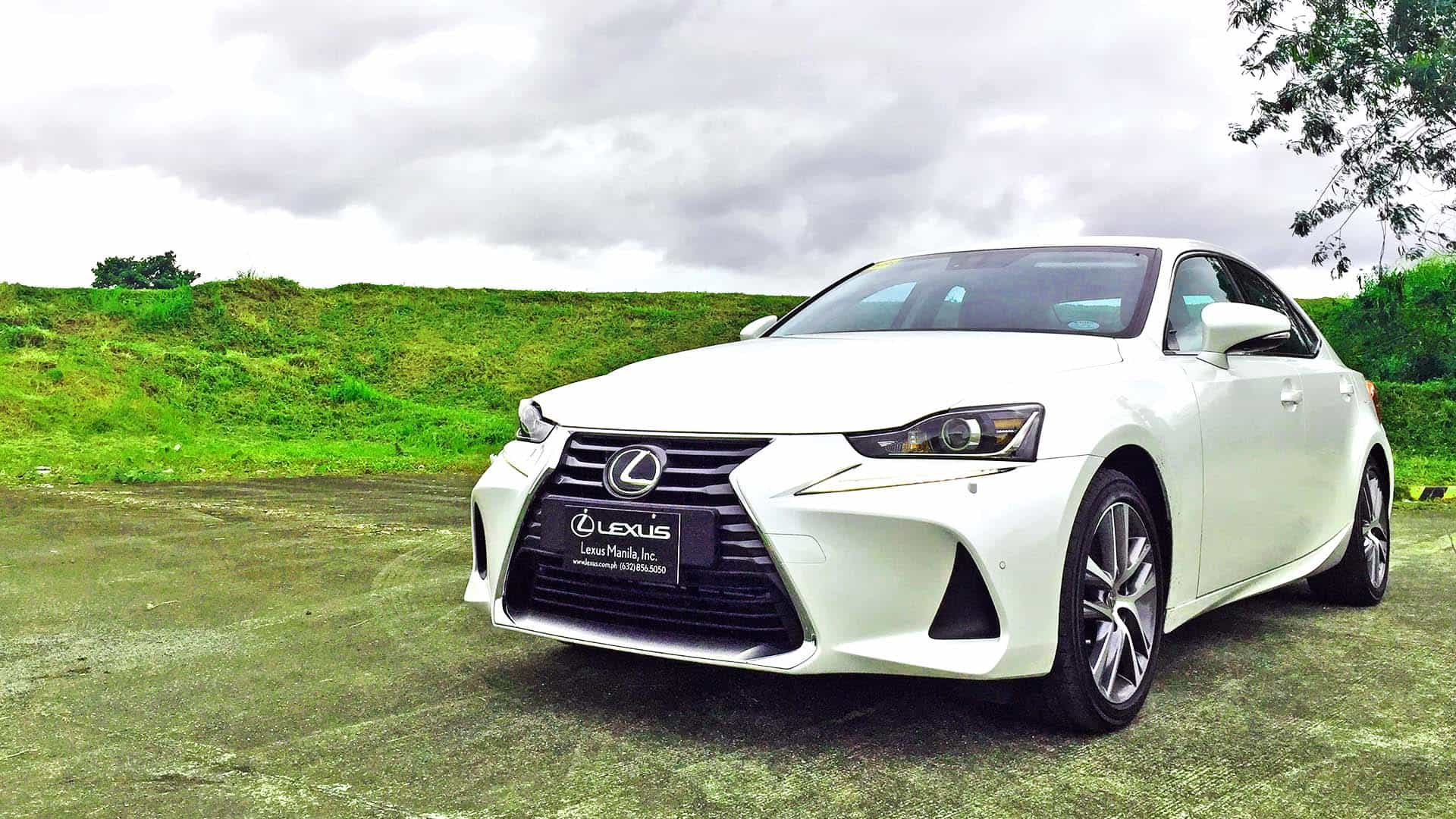 Being the entry-level model in the sedan line of the Japanese luxury automaker, at the outset, it seemed unconventional for me to have tested the ES, GS, and even the RC350 first before the IS. But this route actually showed me that Lexus quality and craftsmanship isn’t determined by trim. Let’s get the price out of the way. The Lexus IS350 (standard trim) is priced at P2.66 million, but after the jump, I’ll tell you how this newly upgraded model, in more ways than one, gives you the kind of joy and driving pleasure that is absolutely priceless. Under the expertise of master craftsmen or takumi, the Lexus IS350 has never looked better. The exterior’s pearl white surface is immediately striking – even after two days of driving under the rain. Seemingly impervious to dirt and mud, the silky smooth finish is achieved through wet-sanding by hand before the final coat of self-healing paint is applied. But what really makes the IS350, or any Lexus for that matter, stand out is that fabulous body shaped by hand and measure by sight, literally. The most stunning part of the IS350’s body is the front that is highlighted by the now-famous Spindle Grille with standard horizontal slots flanked by L-shaped daytime running lights (DRL) beautifully carved on the bumper, just under the LED headlamps that now come in a more stylized casing.

The extra-wide beltline tapers and settles just right above the new triple-layered L-shaped LED taillights that complement the new rear lip and chrome exhaust tips. No stone is left unturned in the design, including the large air vents on the front bumper and the shapely form right before the rear wheel well that is both aesthetic and aerodynamic in form and function. The appointments inside the IS350 are as ingeniously designed as every inch of its exterior, maybe even more. Most noticeable is how all that’s familiar in a vehicle’s interior is reimagined in the IS350 in order to present it in a more unique and artistic way that, in Lexus’ words, “reduce and cut through complexity to reveal purity of purpose and expression.” There are a lot of flat surfaces on the dashboard, stretching along the top of the air-conditioning vents and even in front of the 7-inch multimedia display. They don’t seem to be functional in nature like you could put things on them, but it does look more artsy.

Another thing that’s abundant inside is the soft and supple leather – from the steering wheel, to the seats and even along door panels and the center console. It comes in a certain matte finish that perfectly matches the wood and light brown brushed-metal accents in various parts of the interior. Small touches of elegance like the lush carpet and matching floor mats, the analog clock that automatically lights up when it gets dark, and the seat air-conditioning make the interior experience simply incomparable. If there is one thing Lexus needs to update inside the IS350, that would be the multimedia system. The font and interface feels outdated compared to the rest of the vehicle, or maybe I just got excited by the 3D cockpit with Human Machine Interface (HMI) technology that was introduced along with the Lexus UX concept. Powered by Toyota’s 3.5L V6 2GR-FSE engine with a D-4S twin injection fuel system, the IS350 is prodded by 313hp and pulled by 378Nm of torque – using an eight-speed sequential shift automatic transmission. It will go from zero to 100 kilometers per hour in just 5.9 seconds, all the way to a top speed of 230 kilometers per hour. All these numbers won’t mean squat if not for how – and we go back to the master craftsmen again – the takumi test drive pre-prod and production models to refine ride, handling, and sound to utter perfection. The result is total driving bliss. Acceleration is as smooth as its skin, as powerful as a finely-tuned world-class athlete, and with precision and grip that is categorically best in class. Steering feels light to the touch and easy on the arms – commensurate to its status as a compact luxury vehicle. Lexus may do well to add a backup monitor to the IS350 though because, as good as sensors are, visual accuracy is still the best and it would be a shame to put a mark on its perfect body. When it comes to spectacular aesthetics, luxurious interiors, and the perfect ride and handling for a compact luxury car, you’d be hard-pressed to find anything better than the IS Series. It is powerful, precise, and pompous, with all the goods to back everything up. The exterior design is attention-grabbing, the interior quite indulging and the drive is nothing short of empowering. If you want the best compact sedan out there and don’t mind the pricey tag and the fuel consumption of some five to six kilometers per liter in combined city and highway driving, the Lexus IS350 is, hands down, the only car for you.