The Mitsubishi Mirage, a subcompact hatchback, is one of the cars that has been well-received in the Philippine market. You don't even have to think too much as to why it has become popular in the local market. The Mirage's diminutive dimensions, relatively frugal engine, and attractive price tag are a triple threat that most Filipino brand-new car buyers can't resist. Moreover, the Mirage has proved itself to be one of the best cars available today as it was named as the 2012-2013 Car of the Year--Philippines by the Car Awards Group, Inc.

With the said credentials, the Mirage became one of the top favorites in the Philippine automotive industry. The Mirage nameplate was first heard of in 1978 and it debuted as a front-wheel drive subcompact car. Mitsubishi decided to revive the 'Mirage' nameplate as it introduced a new subcompact hatch at the 2011 Tokyo Motor Show. This would mean that the Mirage we know today is a car model that's currently in its first-generation cycle. As such, the Mirage subcompact hatch has been in the Philippine market since 2012. Four years later, Mitsubishi Motors Philippines Corp. (MMPC) launched the refreshed Mirage in April 2016. Then, in August 2017, MMPC begun the mass production of the Mirage in its Santa Rosa plant. 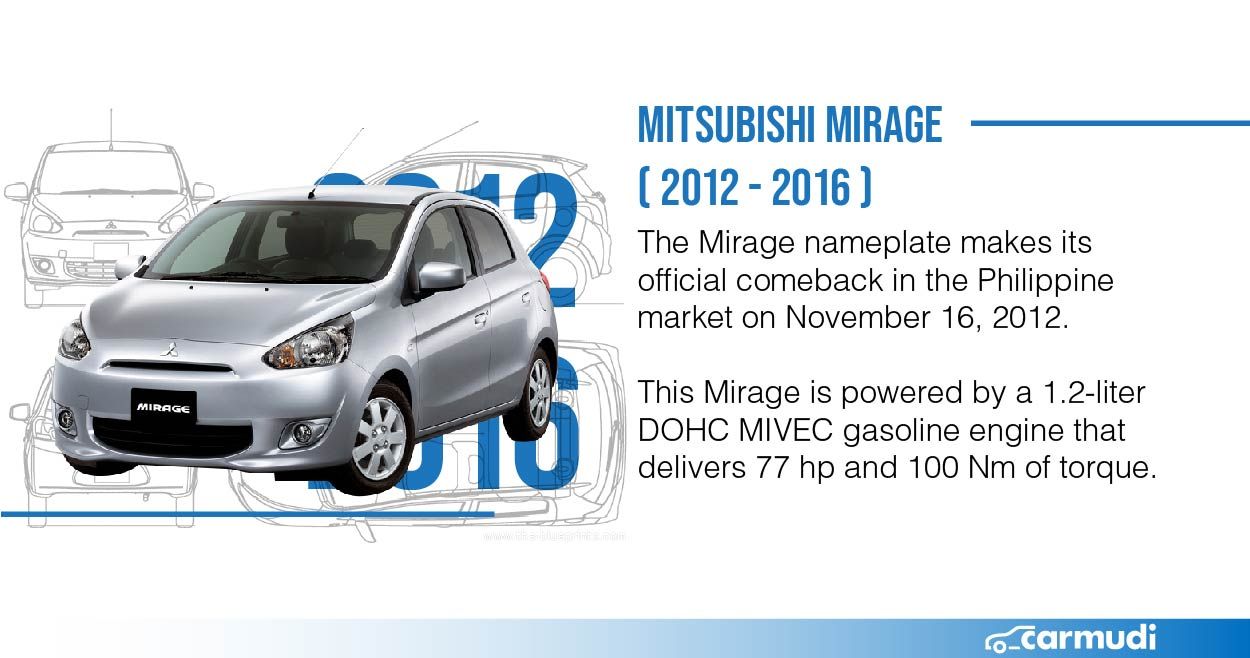 The Mirage nameplate made its official comeback in the Philippine market on November 16, 2012. MMPC held an event dubbed as 'Mirage Music Festival' at the SM Mall of Asia concert grounds to introduce the vehicle in the local market.

The 2012-2016 model year Mirage is powered by a 1.2-liter DOHC MIVEC gasoline engine that delivers 77 hp and 100 Nm of torque. The engine is connected either to a five-speed manual or a Continuously Variable Transmission (CVT).

MMPC claims that the Mirage can achieve a fuel economy rating of up to 21 km/L.

The launch of the Mirage helped skyrocket MMPC's sales in November 2012, with the carmaker's total sales at 3,840 units--its highest monthly sales since 1995. This allowed the company to capture a 23.1-percent market share. In addition, MMPC managed to register a 58.5-percent growth in the passenger car segment due to the Mirage's popularity. 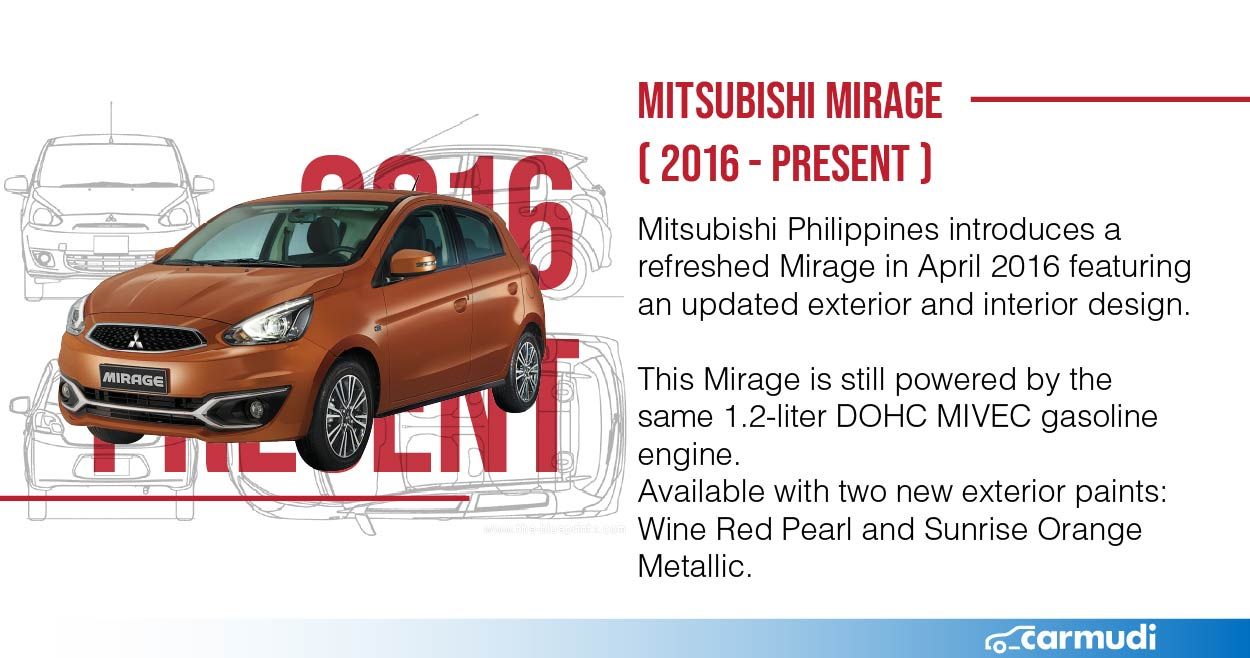 The Mirage has been a success in the Philippine market and MMPC wants to continue the vehicle's positive momentum. In order to achieve that, MMPC introduced a refreshed Mirage in April 2016 featuring an updated exterior and interior design.

The updated Mirage comes with a more aggressive exterior as seen on its restyled front grille and new front bumper design. Mitsubishi's subcompact hatch also debuted with HID headlights with LED-type park lights. The rear gets a design makeover too as seen on the larger and more distinctive taillights.

The interior received minor design changes such as the new three-spoke steering wheel and an upgraded infotainment touchscreen system. Moreover, the Mirage now comes with a feature called 'welcome and coming home' lights, which illuminates your path from the car, making it more convenient when walking off in the dark.

The updated Mirage is still powered by the same 1.2-liter DOHC MIVEC gasoline engine that puts out 77 hp and 100 Nm of torque. The engine is still connected to either a five-speed manual or a Continuously Variable Transmission (CVT).

On the other hand, the 2018 Mirage is available with two new exterior paints: Wine Red Pearl and Sunrise Orange Metallic.

Here are the available Mirage variants in the Philippines:

The local arm of Swedish vehicle maker Volvo has announced that they have reopened the doors to their freshly-renovated showroom...

Cashless public transit transactions will be more rewarding now that AF Payments Inc. have announced that they will reward frequent...

Volvo Cars has just received acclaim from a third-party company for its climate action plan, one of the most ambitious...

General Motors is streamlining their lineup as they have just announced that their next-generation EVs will be powered by a...