Meet the First Owner of Nissan Leaf in Singapore 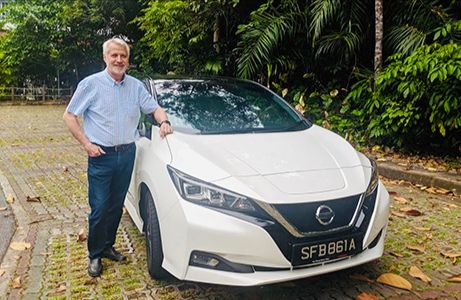 "I was in love immediately. I could get everything I like in a car and I knew I wanted one. I bought the car in one week," Sauzedde said.

While the change from driving a supercar to an EV may sound extreme, when you come to know Sauzedde, an energetic French-born Singapore resident of 30 years, you realize cars have become a way of representing him, his passions and his aspirations over the years.

He recalled that growing up in Paris in the 1950s, the thrilling first moment of seeing his father move "from a bike to a car" the first encounter with the way a car can help change your life.

"My father and I went to see the car and I was so excited. From that point, a car represented freedom for me. You can go anywhere you want, anytime you want."

Then at 18, when he couldn't afford to buy a car, Christian did the next best thing: he built a dune buggy cobbling together parts from a Volkswagen, cutting the chassis by hand, and later swapping out its engine with one from Porsche.

Over the next decades Christian's love of mechanics and engines continued with supercars - he has owned seven.

His professional career meanwhile instigated in him the most meaningful aspect of his life - consciousness about the environment. "When I started working at a paper mill in Paris, which was using waste paper, it showed me that we shouldn't use the world's resources so lavishly. We should be careful with what we have," he said.

"My wife and I now own and run a company in Singapore that specializes in pulp and paper recycling. I realized that my professional activities, that save millions of tons of CO2, were not in accordance with my personal driving choices."

Switching to an electric car was therefore a natural progression. After just one test drive, he bought the Nissan LEAF.

"There are so many great things about the Nissan LEAF. The e-Pedal is one of the fantastic things. I just push one pedal and I have full power. The agility. The 150 horsepower 110 KW motor. The easiness to drive. It feels like the car does whatever you want. I don't even feel that even in a supercar. In a supercar, you fight with the car."

The unexpected effortlessness he felt while driving and owning an EV adds to the charm.

"There's a new pleasure of driving that you get. With the Nissan LEAF – the impression is it's the projection of my own movement. It's very smooth. This car is a statement and is extra fun to drive. Torque is constant at the highest gear and I don't even miss the engine noise of a supercar!"

Beyond the driving experience, it's the broader sustainability aspect that truly anchors his decision to go electric and to advocate it to others too.

"Being the very first new Nissan LEAF owner in Singapore is definitely a title to have! But more importantly, this car represents a change we all need to think about and feel responsible for. As the population grows, the planet doesn't change size. We are taking more of everything. What's going to be left in the long-term? There's no reason to waste. Respect everything in life."

Now six months into his electric vehicle ownership, the ultimate question that remains is: what would he now tell another supercar lover about switching to electric?

"Electric vehicles are not a compromise between performance and comfort. Just try it. Electric motors can go to extremely high speeds. The range is also perfectly convenient, as we just charge the car during our time at the office. Next, the world will be all electric. It's a matter of time. And one day I hope this car, the Nissan LEAF, and a supercar will race side by side. I know who will win."