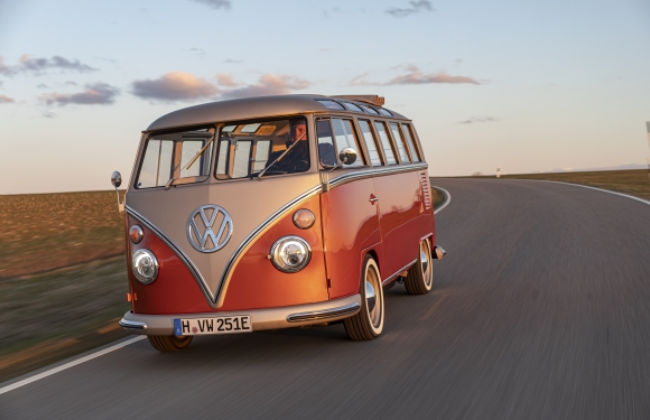 Volkswagen Commercial Vehicles (VWCV) recently introduced the e-Bulli, an all-electric concept vehicle that doesn't produce any emissions on the road. It comes with the drive system parts of the latest Volkswagen electric vehicles, and based on the classic T1 Samba Bus produced in 1966. Prior to this year, Samba spent half a century on California roads before it was "comprehensively restored" this year.

Originally, Volkswagen planned to do a world premiere of the e-Bulli at the Techno Classica 2020. However, the company decided to do a virtual introduction of the vehicle after the show was postponed.

The e-BULLI's 32 kilowatt, four-cylinder boxer engine can deliver up to 81 horsepower and a maximum torque of around 212 Nm. The new drive gives more than twice the force of the original T1 1966 engine that offered 102 Nm. The new e-Bulli can reach a top speed of 130 km/h (electronically limited). Meanwhile, the T1 has a top speed of 105 km/h using the original drive system.

Meanwhile, the direct current:the e-BULLI has a CCS charging socket the high-voltage battery can also be charged at DC fast- charging points with up to 50 kW of charging power. In this case it can be charged up to 80 per cent in 40 minutes. The range with one full battery charge is more than 200 kilometers.


Compared to the T1, riding in the e-BULLI is said to be completely different. This is further enhanced by the chassis, which has also been redesigned: multi-link front and rear axles with adjustable shock absorbers and coilover struts, plus a new rack-and-pinion steering system and four internally ventilated disc brakes.

Its single-speed power transmission is paried with a gear lever, which is now placed between the driver and front passenger seat. Meanwhile, its automatic transmission has the following selector settings: P, R, N, D, B. They are shown clearly next to the lever, so drivers can easily change the vehicle's recuperation level (such as its energy recovery when the brakes are pressed).

Fans of electric mobile vehicles like the e-Bulli can actually now buy the vehicle, with VWCV and eClassics pairing up to offer T1 conversions and T1 complete vehicles in the style of this "classic" crossover. Volkswagen is currently offering the T1 conversion, complete with redesigned front and rear axles.

EClassics GMBH and Co. Kg partnered up with Volkswagen in 2019 and unveiled their first ever product at the IAA International Motor Show in Frankfurt. : the e-Beetle.

This is the 2020 Volkswagen Caddy