Chrysler Cars for Sale in Philippines

Apr 20, 2021 - Currently, 19 Chrysler Cars for Sale in Philippines. Carmudi is your ultimate destination to find all new Cars (1) information, including Car specs, features, prices and images that will help you choose. Find great deals on good condition 18 second hand Cars for sale in the Philippines with price, features, images and specifications. Check out the largest stock of used Cars all over the Philippines, starting at ₱338,000 only.

One of the oldest car makers in the world, Chrysler is one of the biggest automakers from the land of the United States of America. While Chrysler started big initially in its heydays, it has got its presence shrunk on the global platform, with no new products, no focus on more important segments of SUVs and crossovers and slower upgrades to its existing products. It now is one of the prime names in its parent company of Stellantis, which includes other brands too, such as Jeep, Dodge, Fiat, Ram, Abarth, Lancia, Alfa Romeo, Maserati, Ciroen, Peugeot, Opel, Vauxhall and DS.

The presence of Chrysler in the Philippines car market commenced officially in 1999 with the arrival of the 300C sedan, which still continues to be its main and only offering in the current lineup. In all these years, Chrysler also brought two other vehicles – the Stratus sedan and Town and Country MPV – both of which were eventually pulled off from the Philippines car market.

While Chrysler sells two more additional MPVs – Pacifica and Voyager – in the US market, it continues to rely on the latest iteration of the 300C sedan in the Philippines car market, with no focus on other products and segments in general. Chrysler has tasted moderate success with the 300C sedan in the premium end of the Philippines car market, with the used samples of sedan having decent presence in the used car market as well.

In the Philippines car market, when all the other car makers are steadily shifting their focus towards making SUVs and crossovers, Chrysler is sticking to its roots and selling the 300C sedan as its only product in the country as of now. The Chrysler 300C is projected as a midsize luxury sedan, which takes on the likes of bigwigs like Mercedes Benz E-Class, BMW 5-Series, Audi A6, Jaguar XF and Volvo S90.

Amidst such stiff and established competition, the Chrysler 300C might be an underrated offering. However, this premium sedan scores high on road presence and luxury (despite its slightly outdated exterior styling), engine refinement and power from the big 3.6-litre V6 powertrain and comfort provided by its seats and suspension setting.

The Chrysler 300C has been the chief frontrunner for the American car maker right since its inception in the Philippines car market back in 1999. The other Chrysler sedan which one can find in the used car market of Philippines is the Stratus, which was a lesser premium offering as compared to 300C and came with smaller dimensions and a smaller heart in the form of a 2.0-litre four cylinder petrol engine.

Apart from sedans, Chrysler chiefly makes MPVs as well, which focus keenly on comfort and luxury as a whole. In addition to the Chrysler Stratus and 300C sedans, the Philippines car market also got an MPV from Chrysler in the form of ‘Town & Country’. This awkwardly named MPV was sold in the Philippines in the early years of the 21st century in the Philippines, and tasted moderate success with its sleek exterior styling and premium interior cabin for its time.

While Chrysler sells a couple of new generation MPVs like Pacifica and Voyager in the US car market, they are yet to reach the Philippines shores.

Chrysler Cars for Sale in Philippines Price List start at ₱338,000 for the inexpensive model Chrysler Town & Country and goes up to ₱1.023 Million for the most expensive car model Chrysler 300C.

There are 5 authorized Chrysler cars dealers across 4 cities in the Philippines. 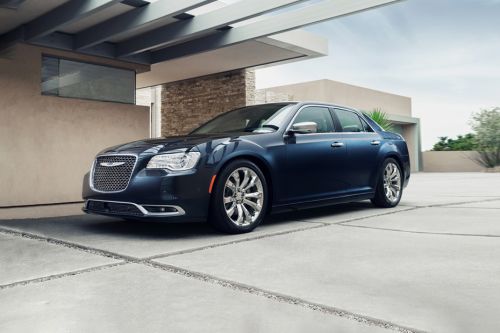