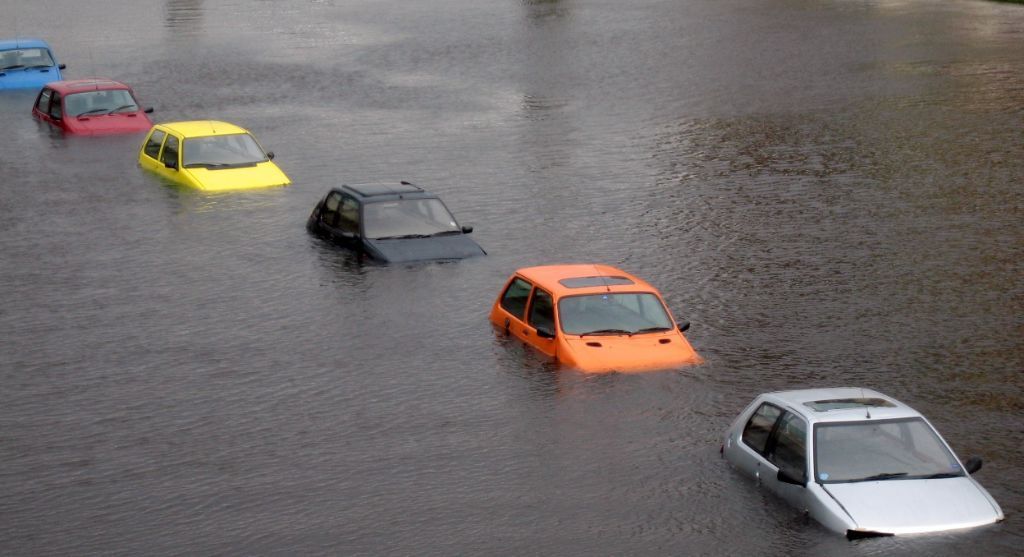 “Acts of God”, also known as “AOG”, “Acts of Nature” or “AOG coverage”, is a term used by car insurance companies to refer to unpredictable, natural catastrophes that can’t be prevented, avoided, or controlled either by preparation or caution. Act of God coverage will help pay for your car’s repairs in case it gets damaged in the aftermath of a catastrophe.

### A brief background of the Act of God insurance policy

AOG coverage wasn’t as popular in the Philippines until the typhoon Ondoy devastated the entire country, left nearly 500 people dead, and destroyed an estimated 14,000 motor vehicles.

This led many Filipinos to purchase Act of God insurance to protect their cars from three of the most common natural calamities in the country: floods, earthquakes, and typhoons.

According to Michael Rellosa, the Deputy Chair and Spokesperson for the Philippine Insurers and Reinsurers Association (PIRA), their AOG coverage has gone up from 20 percent to 60 to 70 percent ever since the Ondoy incident left parts of the country in ruins.

Yet despite its sudden increase, this coverage continues to be an optional add-on coverage for a standard insurance package.

## What does Act of God insurance cover?

AOG coverage may vary from one insurance company to the next, but whatever the case, your vehicle is protected when it gets damaged by any of these calamities:

- Falling objects, such as missiles

## How does Act of God coverage work?

Many car owners assume that having a standard insurance package like a Comprehensive Car policy means they also have an AOG coverage. The truth is, the word “comprehensive” here is quite deceptive, since insurance companies don’t normally include AOG or “Acts of Nature” in this type of policy.

You also can’t purchase an AOG policy by itself. The only way you can avail of this coverage in the Philippine is to get comprehensive insurance first and then add an AOG policy alongside it.

## What are the limitations of Act of God coverage?

Coverage for Acts of God insurance is not always up front; there are times when there are gray areas that need to be clarified first. For instance, some companies exclude earthquakes in their coverage, while others don’t.

It’s always best to ask your insurance company to give you a detailed list of which natural disasters are included and excluded from the policy. Let them enumerate the rules and conditions for each calamity that it covers.

### Act of God or simply negligence?

Another gray area here is that thin line between natural and man-made causes. Sometimes, people confuse the two and lay the blame on nature instead of themselves.

Let’s say that your neighbor’s old tree falls on your parked vehicle and crushes the hood of your car. This happened after a typhoon hit your area. Your neighbor refuses to pay for the damages, citing that it was not their fault but simply a natural occurrence. Now, the question is this: Is it really an Act of God, or simply negligence on your neighbor’s part?

Suppose that the same tree has been infested with termites for years now, and has been rotting from the inside ever since. Was the typhoon the real cause of the mishap, or was it because your neighbor didn’t take any steps to prevent the situation from getting worse in the first place?

This scenario could easily have been avoided if your neighbor took steps to get rid of the termites in the first place. Should this be the case, then you have enough grounds to claim negligence on your neighbor’s part, and not an Act of God.

Many car buyers tend to overlook an AOG coverage when shopping for car insurance. Their main reason is that their chances of encountering a serious calamity is quite rare and doesn’t need attention. While this may be true, it’s always good to take the notch higher by becoming more prepared. That way, when nature throws you a curve ball, you’ll have enough resources to throw the ball right back.

Is My Address Making My Car Insurance Expensive?

You may not realize this, but car premium prices can differ a lot depending on where you are in the...

Everything You Need to Know About GAP Insurance

Guaranteed Asset Protection (GAP) insurance helps protect you financially in case you owe more than your car’s worth at the...

Congratulations on your decision to get married! Now that the wedding bells have rung, you’re probably in the midst of...

How to Calculate Your Premium

Whether new or used, a car is bound to be one of the biggest investments you make. Aside from the...

The Different Levels of Car Insurance in the Philippines

Having car insurance has become more of a necessity than a luxury these days. In fact, it’s one of the...

Riding a motorcycle is fun. In fact, it's so fun that people risk going out in the open despite the...

How to Resolve a Dispute with Your Insurance Company

Even if you’re a careful driver, there’s always the possibility of a car accident happening to you. In the event...

A decade ago, the Philippine National Police released a report about road accidents in the country. According to them, an...