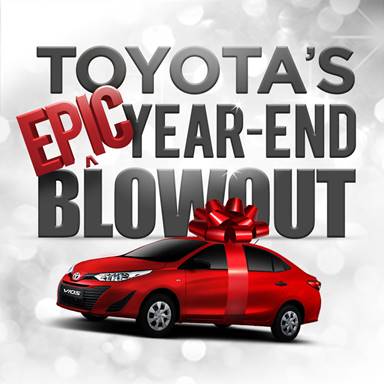 Ending the year strong by getting your dream car this December?

Get even more reasons to choose a Toyota with Toyota Motor Philippines (TMP)'s Epic Year-End Blowout happening exclusively from December 9 to 20.

A total of 12 brand new Vios units will be given away to 12 lucky Toyota customers who will win the raffle after purchasing any of the participating models within the promo period. To qualify for the raffle, customers only need to purchase a Vios, Fortuner, Hilux (except Cabin & Chassis), Rush, Hiace (FMC GL Grandia & Commuter Deluxe and Pre-FMC Commuter), Innova, Wigo, Altis (FMC & Pre-FMC) or Avanza (MC & Pre-MC) from any of Toyota's 70 dealerships nationwide.

On top of the chance to win a Vios, all customers who will reserve an Innova (all variants), Wigo (all variants), Avanza MC (E A/T and E M/T) and Pre-MC (all variants), Hiace GL Grandia and Commuter Deluxe will also be eligible to pick an instant prize in the form of cash discounts as much as P50,000.

Aside from these special treats, flexible payment deals and options are also available for several participating Toyota models: Vios (FMC), Fortuner, Hiace (Pre-FMC), Hilux and Rush from December 1 to 31; and Wigo, Avanza (MC), Hiace (FMC) and Innova from December 9-20. Details can be read online at http://toyota.com.ph/yearendblowout/.

"December has traditionally been a time for many Filipinos to reward themselves and their families by finally deciding to get the car they've been eyeing. We want to make this car purchase experience merrier and even more gratifying for our customers through Toyota's Epic Year-end Blowout," said Ma. Cristina Arevalo, TMP's First Vice President for Brand and Product Planning.

"And with the Toyota Sure Advantage that guarantees our customers enjoy Toyota's quality, durability and reliability, fulfilling ownership, great value, and technologies that matter, there's no doubt that choosing Toyota is always a wise, and winning investment," she added.

Take advantage of this limited-time promo by visiting the Toyota dealership near you. You may also inquire online via Toyota's official website http://toyota.com.ph.