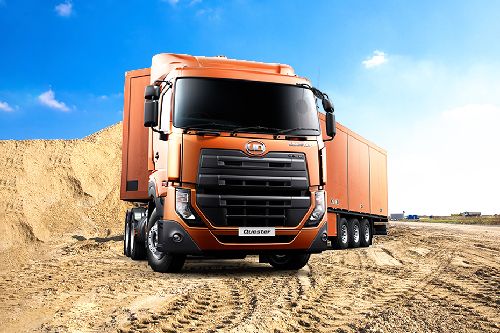 The Quester GDE is a tractor head that is known to have a GCW of 56 tonnes which makes it very effective for transporting heavy cargo. Powering the GDE is a Euro-4 compliant diesel engine that makes between 1800-2000 Nm of torque and comes paired to either a 9-speed or 12-speed gearbox. The Quester GDE is pretty advanced in terms of safety as it features a full air brake system along with an automatic slack adjuster, spring-based parking brakes, and seat belts. You also get optional ABS and engine brake. The flexibility of the new Quester GDE makes it a great choice for numerous applications like construction, waste management, and cargo-hauling duties.

Get the better insights of UD Quester GDE, Read our expert opinion and helps to buy or not

Not many sales and service points are available

Cabin looks too functional and basic

The best for our business

The UD Quester GDE is the most efficient tractor head we have in our petroleum refining business. The 6x2 tractor head comes with...