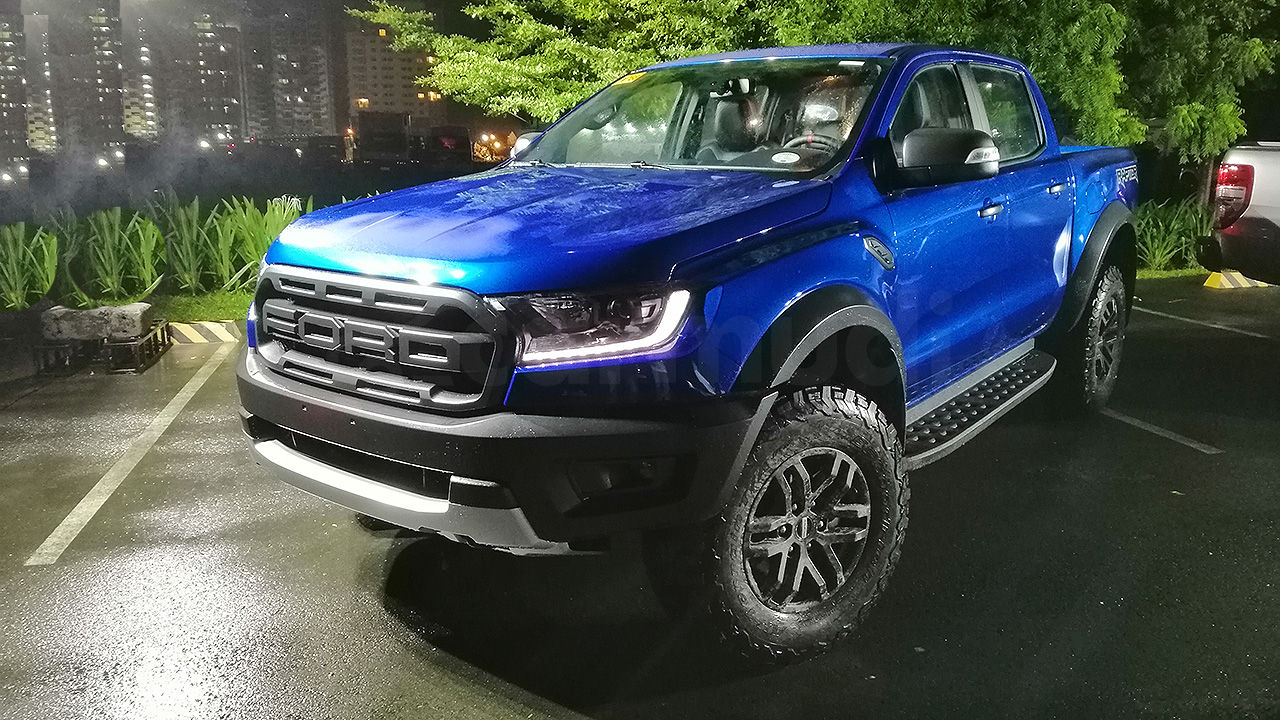 Ford Philippines has already revealed a lot of details about the Ranger Raptor prior to its launch, but for those who don't know about it yet, it's the Ford Ranger with the volume turned up to 11 AND injected with steroids as it has not only been fitted with a new 2.0-liter Bi-Turbo diesel engine that puts out 210 hp and 500Nm of torque that's paired to the same 10-speed automatic transmission as its big brother--the original Ford F-150 Raptor--but it also has a unique frame that's been specifically designed to travel off-road at high speeds and rides on aluminum double wishbone suspensions up front and innovative coilover suspensions with a Watt's link setup and solid axles at the back AND exclusive Position Sensitive  Damping shock absorbers on all four wheels by Fox Racing. And then there's the 17-inch, all-terrain tires developed especially for the Ranger Raptor by BF Goodrich. Now, that's only some of the mechanical bits that set the Ranger Raptor apart from the Ranger. There are also a few electronic upgrades that the Ranger Raptor has that the standard Ranger doesn't like its Terrain Management System that has six preset driving modes to help the high-performance pickup conquer any terrain, the most notable of which is the Baja mode. Inspired by the legendary Baja 1000 desert rally race in Mexico, it's the glue that puts it all together for the Ranger Raptor to do what it was designed to do in the first place--go on high-speed, off-road incursions with total confidence that the electronic nannies won't hold you back from realizing the truck's full potential as gear selection is optimized for maximum performance while mapping holds the gears longer and downshifts more aggressively.

The Ranger Raptor also gets other electronic updates, like Ford's proprietary SYNC 3 fully-integrated, voice-activated system that let's the driver control the infotainment system simply by voice command and a satellite navigation system that's perfect for going off the beaten path with its 'breadcrumb' feature that leaves a digital trail when going off road. And then there's the Electronic Stability Control, Trailer Sway Control, Hill Start Assist, Hill Descent Control, and Adaptive Load Control. For all these attractive features, perhaps the most important--and appealing one--to prospective Ford Ranger Raptor owners is its PHP1.898 million price tag. "We are excited to welcome the highly-anticipated Ranger Raptor to the Philippines," said Bertrand Lessard, managing director, Ford Philippines. "The Ranger Raptor showcases the best of Ford Performance's expertise in vehicle design and engineering, and we know our customers are really looking forward to enjoying its immense off-road capabilities."

As for the updated Ford Ranger, as we previously reported, while Ford has retained the 158 hp, 2.2-liter engine for the lower-spec variants, it has ditched the 197 hp, 3.2-liter mill of the Ranger Wildtrak and in its place is a new 2.0-liter Turbo that makes 178 hp and 420 Nm of torque. Even better though is that the Ranger is also available now with the same 2.0-liter Bi-turbo in the Ranger Raptor for the Wildtrak variants. Transmission choices are either a six-speed manual or automatic with the 2.2-liter mill, a six-speed manual or the aforementioned 10-speed automatic for the 4x2 Wildtraks, and just the the 10-speed automatic for the 4x4 Wildtrak. Updates to the new Ranger are: its Autonomous Emergency Braking system that pre-charges the brakes and alerts the driver with audible and visual warnings when it detects an impending collision with a pedestrian or another vehicle; Active Park Assist which is a segment-first and parallel parks the vehicle with the driver only using the throttle and brake; Adaptive Cruise Control which senses traffic and correspondingly adjusts the vehicle's speed depending on the vehicle in front; Lane Departure Warning which alerts the driver by making the the steering wheel vibrate when the system detects the vehicle is unintentionally moving out of its lane; and the same SYNC 3 system in the Ranger Raptor. The Ranger also has another segment-first with its Tailgate Lift Assist, a new internal mechanism that makes the tailgate easier to lift with a 70-percent reduction in the initial force required to raise and lower it. New to the Ranger Wildtrak variants are the Smart Keyless Entry and Push Button Start. Exterior updates to the Ranger are its new grille which complements the distinctly-chiseled  lower bumper that now has a broader intake to give it a more balanced look while the Wildtrak also gets LED daytime running lights, HID headlights, hoop sports bar over the, and roof and bed rails. Inside, the Ranger has a black theme that contrasts with the shadow chrome and silver accent stitching. Even the Ranger's suspension  has also been upgraded, reducing body roll and improving on driving experience. Pricing for the Ford Ranger are as follows:

"The new Ranger continues to bring its 'Built Ford Tough' promise to life, delivering an even more capable pickup truck," said Rodel Gallega, vice president, Marketing and Sales, Ford Philippines. "We look forward to serving even more Filipinos with the new Ranger's tough capabilities and versatility that makes it the perfect vehicle for work or play." The Ford Ranger Raptor and the updated Ford Ranger will be available in all Ford dealerships nationwide starting today, September 22. Test drives for the vehicle will also be conducted today at the Ford Island Conquest Year 2 in Arca South in Taguig City, near the old FTI Complex, from 9 AM to 5 PM.
Patrick Everett Tadeo on Sep 22, 2018
Share this article
2 views

The Philippine Government may have relaxed its enhanced community quarantine (ECQ) guidelines, but it’s far from business as usual with...

Auto Nation Group (ANG), official distributor of Jeep vehicles in the country, is proud to announce two new additions to...