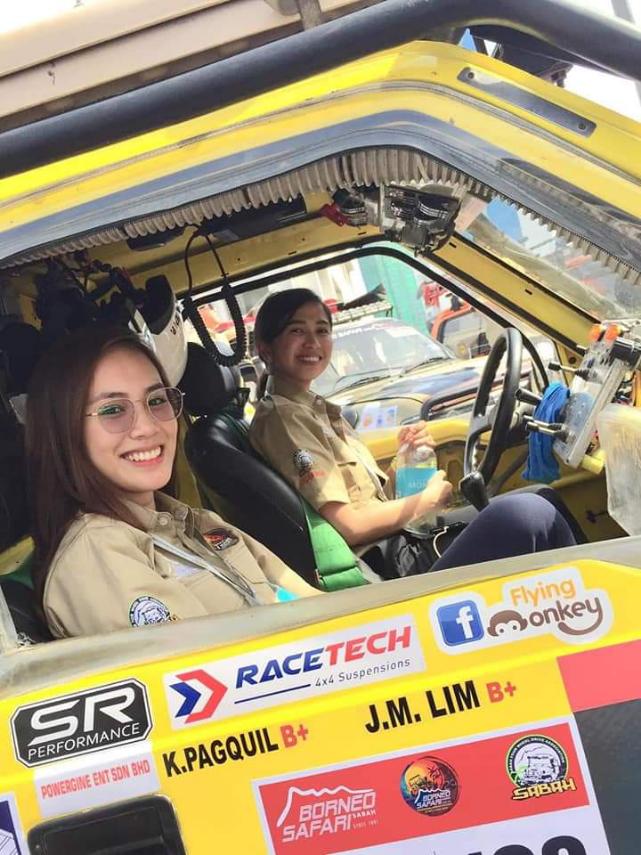 Team Philippines made its debut in Borneo Safari, by joining the 29th season of the biggest 4x4 pilgrimage in the region. Over 400 vehicles and 1,200 participants gathered in front of the Sabah Tourism Ministry in downtown Kota Kinabalu to join Borneo Safari 29.

The team is spearheaded by Borneo Safari Philippine Qualifier (BSPHQ) champions Edison Dungca and Bomvet Santos. Despite BSPHQ being held barely a month prior to Borneo Safari 29, the duo wasted no time in preparing for the biggest race of their lives. Joining them were TeamPH #199 lady racers Karen Pagquil and Jezza Mae Lim. Pagquil and Lim’s entry marks the first-ever participation of an all-female team in the 29-year history of the event.

Riding TeamPH race car #110 were Dungca, a 2x National Association of Filipino Off-roaders (NAsFOR) champion and Santos, a seasoned off-road racer from Nueva Ecija. The duo encountered mechanical issues at the early stages of the competition and finished placing 18th in a pool of 23 after just six special stages (SS). Fortunately, they rallied during the latter part of the competition to finish 14th overall and second in the International Category. For a first-timer competing against seasoned veterans from Malaysia and Russia, it was a memorable and proud moment for TeamPH 110. Taking top honors were Liew Fui Kong and Agustinus Asananen Bin Ara of Team 128 followed by Lo Fui Min and Alshen Lo Xiuen Lung of Team #123 with Roland Liew Sue Khiong and Sajeymee Bin Janish of Team 133 rounding off the top three. Pagquil and Lim, on the other hand, held on to the 19th spot until the final day of the competition, succumbing in the last special stage to finish 21st in the 23-competitor pool.

For his part, Event Director of Borneo Safari PH Frederick Corro expressed gratitude over team's participation in the said regional event. “We feel honored to have been able to represent the Philippines in one the most exciting 4x4 events in the region. It was a thrill to compete against seasoned veterans from Malaysia and Russia. This was TeamPH #110’s first time in the Borneo Safari so this was definitely a memorable and proud moment for us,” Corro said. TeamPH' participation to Borneo Safari 29 was made possible through the support of Aleson Shipping, Maxxis Tires, FCC Trading, the local government of Bataan, JGL Brokerage, JGL Travel and Tours, Carl Ronnow, Uniship, Filtra Lumber, Cerdas Group, Powergine, 199 OffroadHouse, Racetech Suspensions, TRE Lockers, SR Performance Offroad PH, Come Up Winch, Berrima Diesel, ES Printmedia, AEG Powertools, Romate, Air Asia, Pan Hotel and FyrLyt. Launched in 1990, Borneo Safari is the biggest and oldest 4x4 competition in the region. Organized annually by the Sabah Four Wheel Drive Association (SFWDA). Borneo Safari has grown, through the years, to become the region’s most looked forward to extreme 4x4 competition.