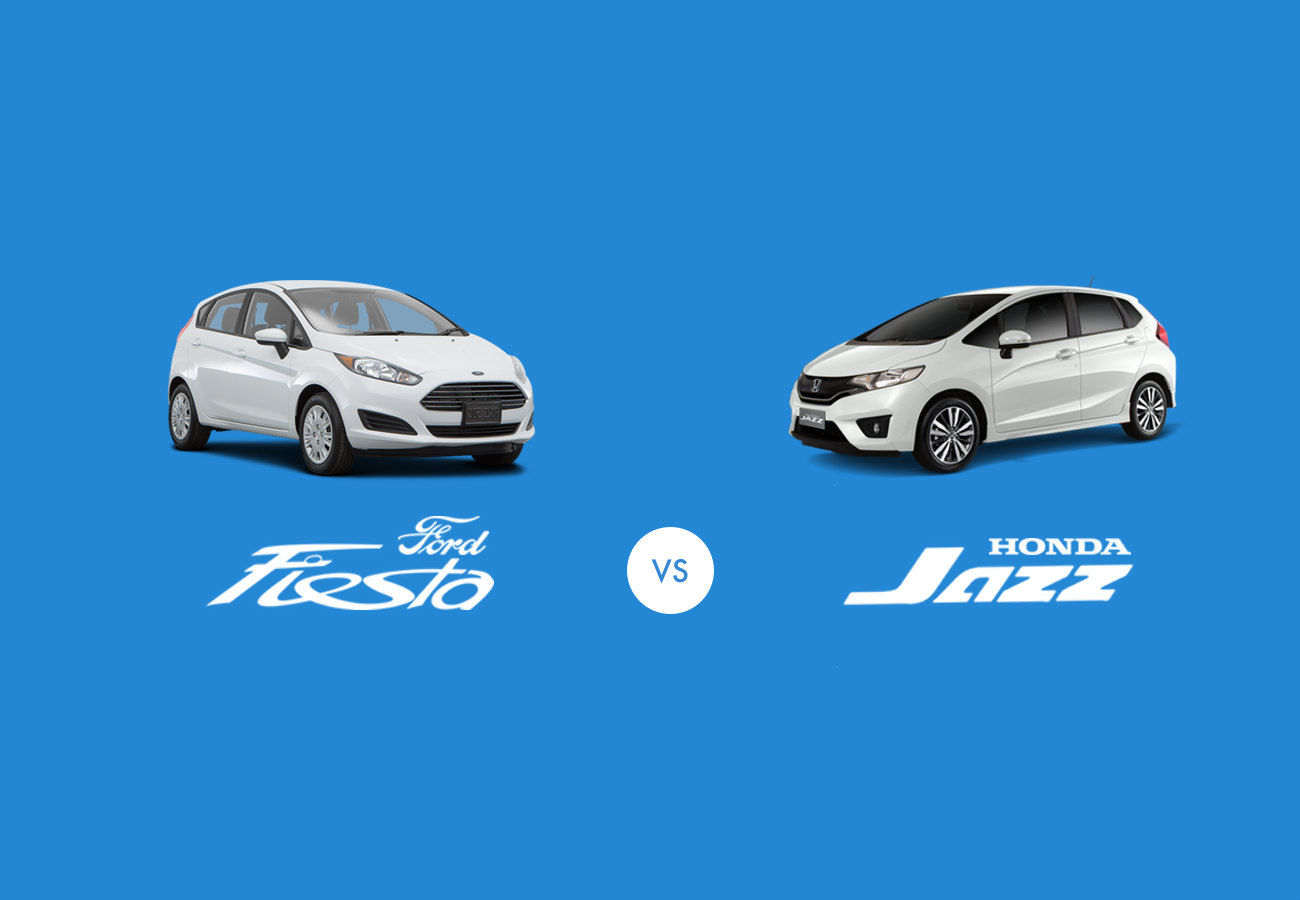 Little hatchbacks epitomize urban driving to a T. Built for the hip city crowd with an as-of-yet limited spending budget, these compact cars provide a charming and usable mode of transport. The best ones manage to provide a healthy dose of driving excitement without burning a hole through your wallet, which can be quite the enticing prospect for young, first-time car buyers. Now the question is, does the 2017 Ford Fiesta or 2017 Honda Jazz fit the bill? Let’s find out.

To look at the perspective of the younger car-buying crowd, the contemporary factor is going to matter a lot. The Honda Jazz takes its cues from the Honda Civic, and thus follows its bigger sibling’s slim yet trendy front fascia characterized by a piano black front grille and strong design lines that wisely pull the eye away from the unimpressive wheel arches and tiny-looking wheels. The 2017 Ford Fiesta retains the same angular grille that’s currently the signature in many Ford models. However, the sharp and piercing headlights is where it truly stands out. We especially like the fleek outer edges of the headlights—the way it curves upwards makes it looks so ‘kikay.’ Beefier-looking than the Honda Jazz, the Fiesta takes on a more masculine look than the latter, so based on appearance alone, you may already have your own preference depending on your gender. Winner: Honda Jazz

The Honda Jazz offers buyers with a choice of cloth or leather-trimmed inner accoutrements depending on the selected trim level. A tilt and telescoping steering wheel comes standard, as do Bluetooth connectivity and audio streaming, among other things. Trunk space behind the rear seats of the Honda Jazz is 16.6 cubic feet and 52.7 cu.ft. with the seats down. If you think that’s impressive, then wait till you see what the Ultra Seat Arrangement feature can do. It allows Jazz owners to fully utilize the entire cabin space via four different seat placement modes (Tall, Utility, Long, and Refresh), which makes the hatchback’s interior all the more flexible despite its limited size. The Ford Fiesta also offers a choice between cloth and leather trimmings. The rear seat is a 60:40 split, and folding can be done with a simple one-handed operation that frees up over 23.4 cu. ft. of space. On the infotainment front, the Fiesta is spiced up by a voice-activated SYNC3 system with Sony audio and 8 speakers. Meanwhile, the Jazz comes with a very visible 7-inch touchscreen display connected to a 6-speaker audio system. Winner: Honda Jazz

The Fiesta comes equipped with Ford’s 98 hp and 170 Nm torque 1.0 EcoBoost engine. If these numbers seem unimpressive, don’t be fooled, because they’re all the EcoBoost system needs to deliver a solid performance matched by a healthy fuel economy rating.  It’s the winner of the International Engine of the Year for four years running after all, and that’s no small feat. Horsepower is identical for the two cars at 98, but the Jazz’s 119 Nm torque is where it falls short. The Jazz claims capable of 5.1 L/100km while the Fiesta inches ahead with 4.9 L/100km. Unfortunately for the Jazz the EcoBoost’s acceleration capabilities are too much to stack up against no thanks to significantly lower torque figures. And though the 1.3-liter in-line DOHC 4-cylinder iVTEC engine’s performance numbers are pretty decent, they just seem measly compared to the Ford’s. On the performance side of things, picky drivers may gravitate toward the Fiesta since it offers the excellent handling and maneuverability that the Blue Oval is known for. The work that Ford has put into the Fiesta obvious, improving its technology, using a more efficient engine and offering distinct trims that make the model appeal to a wider range of drivers. Winner: Ford Fiesta

While both vehicles are equipped with ABS, hill start assist, ISOFIX, and their own respective stability and braking programs, the Fiesta zooms ahead safety-wise in the airbag department with five, as opposed to a standard two for the Jazz. Traction control is also absent in the latter. Though in defense of the Jazz, it does come with a standard backup camera and adds side curtain airbags as well as Honda’s excellent LaneWatch blind spot monitoring system to high end models. Backup camera and parking sensors are mere options for the Fiesta. Winner: Ford Fiesta

You’ll be excused for thinking that the Honda Jazz is the shoo-in winner in this department given the Japanese brand’s reputation for cutting edge gadgetry, but actually, it’s too close to call considering Ford’s momentous efforts to up the Fiesta’s high tech game. The latter gains the edge in the infotainment department through the more responsive and intuitive MyFord Touch system. Plus, Ford’s system accommodates Android phones, while HondaLink does not. The Fiesta also offers standard rear parking sensors, automatic climate control, and auto-dimming rearview mirrors, which aren’t available in the Jazz. Winner: Ford Fiesta

So which is the ultimate winner when the Honda Jazz vs the Ford Fiesta? Prices for the Honda Jazz starts at P793,000, while the Fiesta starts at P755,000. Couple the Fiesta’s lower price with its fun driving dynamics and significant torque advantage, it’s immediately the easier choice to make. However, if sleek looks, generous equipment, and a larger interior are more your thing, then the Jazz should tick the box.
Carmudi PH on Apr 03, 2017
Share this article
7222 views