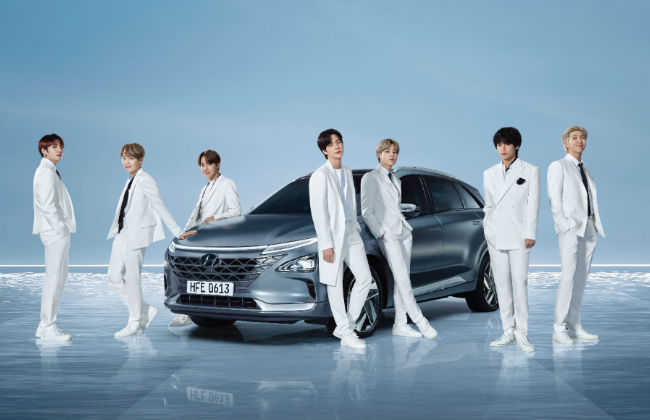 April 22 is the day the whole world celebrates Earth Day, and Hyundai Motor Company honors Mother Nature by creating a film for its Global Hydrogen Campaign with the popular K-pop group BTS.

Hyundai’s flagship fuel cell electric vehicle (FCEV) NEXO appears at the end of the film, showcasing Hyundai's vision for hydrogen energy as the "energy of the future"

The film is a testament to Hyundai's goal to help create a sustainable future while reminding everyone to take care of our planet.

"We hope this film will inspire our customers and fans around the world to take care of our planet in commemoration of Earth Day," said Wonhong Cho, Executive Vice President and Chief Marketing Officer of Hyundai Motor.

"We will continue to utilize our Global Hydrogen Campaign with BTS as a platform to raise awareness of the environmental challenges of our time and to champion hydrogen for a more sustainable future.”

The 60- and 120-second versions of the film premiered globally on Hyundai's official worldwide YouTube channel (@HyundaiWorldwide) on April 22. It will air as TV commercials on major networks around the world over the next few weeks.

Here's the 60-second version of the film:

The K-pop group BTS has helped spread the message of sustainability with millenials. As the Global Brand Ambassador for Hyundai Motors, BTS has been an advocate of sustainable mobility under the slogan #BecauseofYou.

Their first film for Hyundai showcased the company's clean mobility vision, and was screened on a digital billboard at Times Square in New York City. The seven members of the group also arrived at the 62nd Grammy Awards riding in the ultimate zero-emission vehicle, the NEXO.

Hyundai's Global Hydrogen Campaign started its first leg by launching the #DarkSelfieChallenge, launched on April 13 ahead of Earth Day.

The online event, where BTS members are also participating in, allows everyone to celebrate Earth Day simply by switching off their lights and taking a selfie in the dark using a flashlight. Those who take part in the event can share their photos on social media with the hashtags #DarkSelfieChallenge and #EarthDay until May 4.