Should I buy a car that runs on gasoline or diesel? 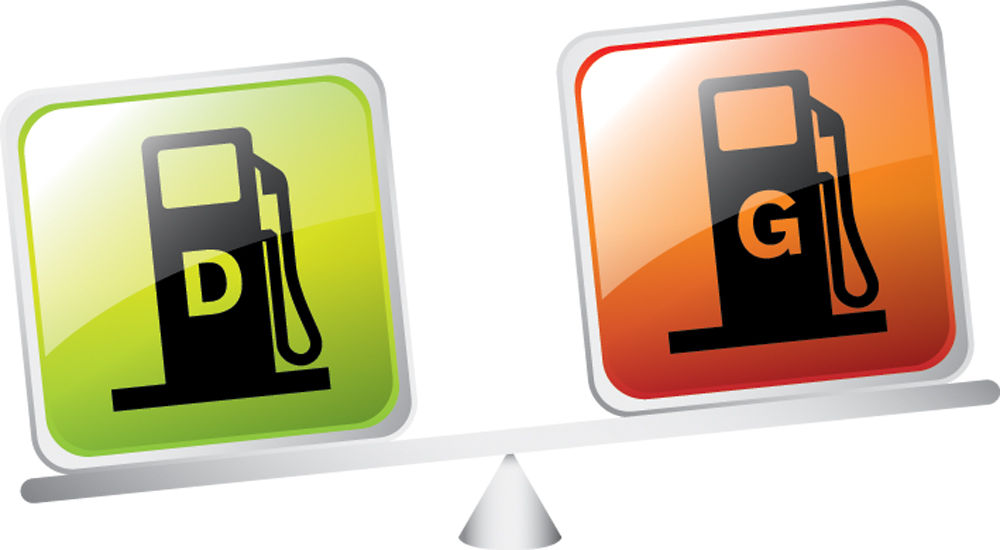 The type of fuel a car uses is one of the basic factors that should be considered when buying a car. Each has its own pros and cons, which should be carefully analyzed before buying the right model or variant for your lifestyle. Below is an in depth comparison if you should buy a vehicle that runs on gasoline or diesel engine.

For much of this review we will look into the different facets of each engine, especially its ownership cost, maintenance, efficiency and performance. As some car models offer both gasoline and diesel variants, this guide could help you decide which unit should will fit your daily driving experience.

Difference between gasoline and diesel

Theoretically, both diesel and gasoline engines are similar as both are internal combustion engines which convert chemical energy in fuel into mechanical energy. When both fuels are burned, the energy they produce moves the pistons up and down inside the cylinders. This linear motion is then converted into rotary motion through the crankshaft and turns the wheels of the car forward.

The main difference, however, is found in its injection process where most engines use a carburetor or port injection. Diesel variants use direct fuel injection, while most gasoline-powered cars apply a more roundabout route.

Advantages of a diesel engine

Today’s diesel powered vehicles are more fuel efficient than their gasoline counterparts by around 25 to 30 percent. As fuel, diesel (even the premium ones) is about 20 percent cheaper than the cheapest unleaded fuel.

A lot of the current SUV and pickup models in the Philippines have a diesel engine which has common-rail direct injection and turbocharging. This in turn offers far more torque and power when compared to gasoline powertrains. This improvement allows vehicles running on diesel to have easily accessible power at low RPMs, which explains its fuel efficiency and ease of driving.

Disadvantages of a diesel engine

While the car industry is moving more proactively towards diesel, it also has its pitfalls. For one, it produces a lot of noise, although it has been made quieter in recent years by its manufacturer. Diesel engines (especially CRDi) are also very sensitive to poor fuel quality. Pouring in a dirty batch of diesel could severely damage its fuel system and could cost you a hefty repair cost.

Diesel engines also need additives and special lubricants to maintain a healthy performance as the country has a poor diesel-fuel quality. Additionally, the service cost for gasoline engines is a third of the price of a diesel engine service.

In terms of emissions though, modern diesel engines are cleaner than ever before, thanks to compliance requirements like Euro 4 and 5. With that in mind, the driving experience you'll have in a today's diesel-fueled cars is nearly identical to the one you'll get from a gas-powered variant.

Advantages of a gasoline engine

Most small cars run on gasoline because it is cheaper than diesel-powered powertrains. Take for example the Toyota Innova, one of the bestselling cars in the nation. Its base gasoline variant (2.0 J M/T) is currently pegged at P832,000 while its diesel alternative (2.5 J M/T) has a price tag of P887,000. That’s a difference of P55,000.

Also, gasoline engines are cheaper to maintain and repair because of the quality of their fuel. This type of fuel is also cleaner in terms of the carbon footprint it leaves.

Disadvantages of a gasoline engine

Classic gas engines (without turbo and compressor) usually offer less torque, which means less hauling power and a lower fuel efficiency. On average, gasoline engine cars have a shorter lifespan of between 120,000 and 150,000 miles before they require an overhaul; compare that to the 450,000 to 500,000 miles for diesel powertrains. Another issue for gasoline is its higher price, which in the long run could easily overturn the savings you made for not buying the diesel model.

Cost comparison of gasoline vs. diesel

In this section we will have a deeper comparison of the prices that are involved in owning a diesel or gasoline engine with the Toyota Innova 2.0 liter Gas and 2.5 liter Diesel being our example. Note, however, that other models may yield a different result and conclusion.

On average, a car will make a run of more than 48,000 kilometers in its first three years. The Innova’s diesel variant has a fuel economy of 12 km/L and the gasoline has an efficiency of 9 km/L, both in urban driving conditions. The price of diesel today ranges from P 27.43 to P38.05 per liter in Metro Manila, while gasoline is at P37.52 to P50.22 per liter.

Taking a presumptive average price of P30 for diesel and P40 for gasoline for those three years multiplied by the average mileage of a car (divided by the fuel efficiency of each engine) would yield a three year fuel cost of P120,000 for the diesel and P213,333 for the gasoline. That’s a P93,333 difference, with the diesel being more cost-efficient. 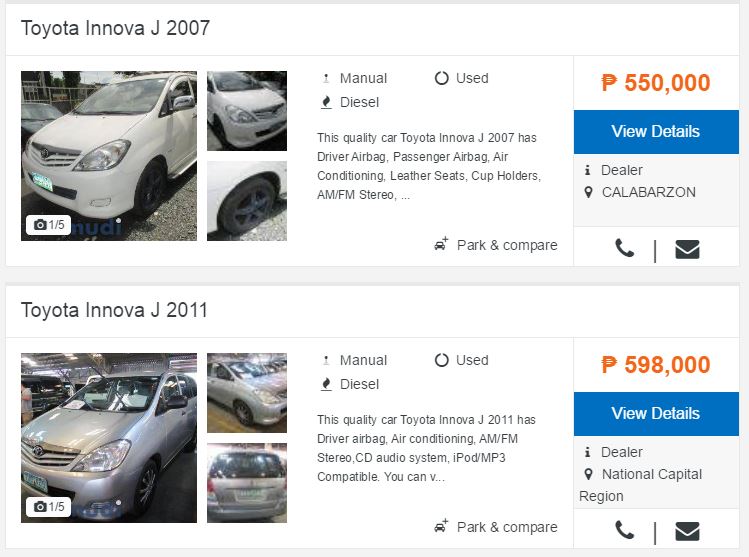 For the resale value, we looked into Carmudi’s database and looked for a three-year old Toyota Innova and older that is currently being sold. The search showed that the diesel base variant has a could fetch in P650,000 on average, while a base gasoline variant costs around P550,000. This figure, however, would still depend on the general condition of the unit and the customization done. You can clearly notice, however, that there is a P100,000 discrepancy on the resale value of the two fuel variants.

Overall, both engines have their strong points and weaknesses. Generally, if you are going to keep your car for long runs, go for the diesel as it proves to be more efficient on fuel cost and has a higher resale value. Do note however, that if damaged, the repairs of its engine could easily put a hole on your pocket.

If you have plans to switch cars in a short-term period go for the gasoline variant as it is cheaper to own and maintain. If you are also aiming for speed on the highway, gas is the way to go.

Is Your Car Carrying "Bad Gas"?