While the Philippines is yet to receive any medicine or vaccine against the dreaded Covid-19, the Department of Transportation (DOTr) is now gearing to reduce the physical distancing protocols on public utility buses and other modes of transport.

The reduced physical distancing, the DOTr explained, is to “help in the opening and recovery of the economy.”

According to the DOTr, public transportation will be gradually reduced from 1 to .75 meters starting today ( Monday, September 14) while maintaining the “No Face Mask, No Face Shield, No Entry,” as well as the “No Talking and No Answering Calls”policy while inside public commute vehicles.

The latest ordinance will be implemented following the approval of the Inter-Agency Task Force on Emerging Infectious Diseases (IATF-EID) to increase ridership.

DOTr Undersecretary for Administrative Service Artemio Tuazon, Jr. cited “complaints the lack of public transportation and the calls from the economic team.”

According to DOTr, the government will cut down the physical distancing gradually after very two weeks, starting from one-meter distance previously enforced since August 19, to 0.75 meters (from today till September 27), to 0.5 meters (September 28-October 11), and 0.3 meters (starting 12 October 2020). 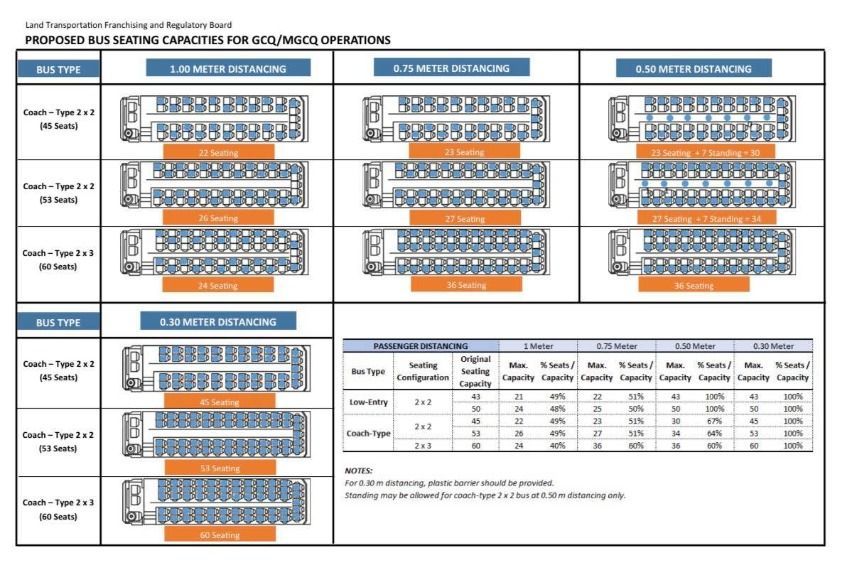 The transportation department noted that the IATF initially approved the 0.5 meters. However, the Transportation Secretary Arthur Tugade deemed it prudent and safe to instead gradually reduce it, starting at 0.75.

However, they clarified that the said protocol “is subject to changes should there be any concern after the implementation.”

With that, PUVs are also expected to accommodate more passengers with the enforcement of the new protocol.

Land Transportation Franchising and Regulatory Board (LTFRB) Chair Martin Delgra explained that the reduction of physical distancing to 0.75 meters will yield to an increased capacity of one to two passengers or 10-12 percent on public utility jeepneys.

Meanwhile, Delgra projected an increase of 1-3 passengers on 2x2 buses, while the 3x2 type are expected to have 36 passengers from the current 24-25 limit.

The UV Express vans, will have an additional 1-2 passengers, following the latest distancing protocol.

Relatedly, the LTFRB has also allowed the opening of 28 more traditional PUJ routes, with 1,159 authorized units to ply in Metro Manila today.