BMW wants you to refer to its new crossovers as sports activity vehicles (SAVs). To prove that these new models deserve the moniker, the German carmaker unveiled the superbly sporty 2021 BMW iX3.

But more than just an upscale urban driver, the 'SAV' is notably the first fully electric vehicle in the BMW X range, and also the first to come with an all-electric drive system for the brand.

The iX3 will also be the first model produced at its Chinese manufacturing facility in Shenyang destined for other markets outside The Middle Kingdom. 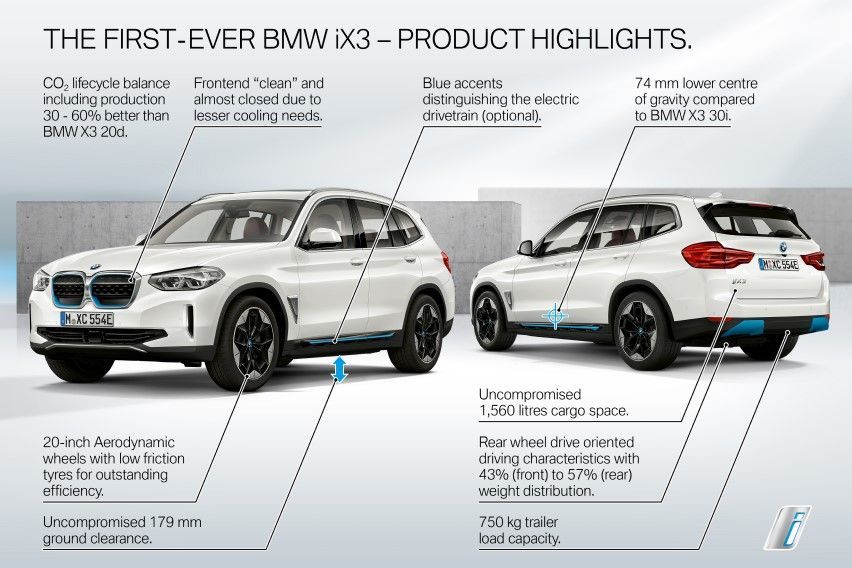 BMW equips the all-electric crossover with a high-voltage battery sporting the latest cell technology. With a total 80 kWh capacity, the battery can power the car up to 458kms per charge under the new WLTP test cycle or approximately 520kms under the less-lenient NDEC test cycle. The same electric drivetrain will also be installed in the BMW iNEXT and i4’s 2021 versions.

As for the rest of the iX3’s performance numbers, the electric motor produces 286hp and 400Nm, while the car itself can accelerate from 0-100kmph in 6.8 seconds and hit a top speed of 180kmph.

Speaking of power density, the new all-electric drive system improves on its predecessor’s capabilities by 30 percent. It’s also eco-friendlier, with zero rare-earth materials to be found in its construction. 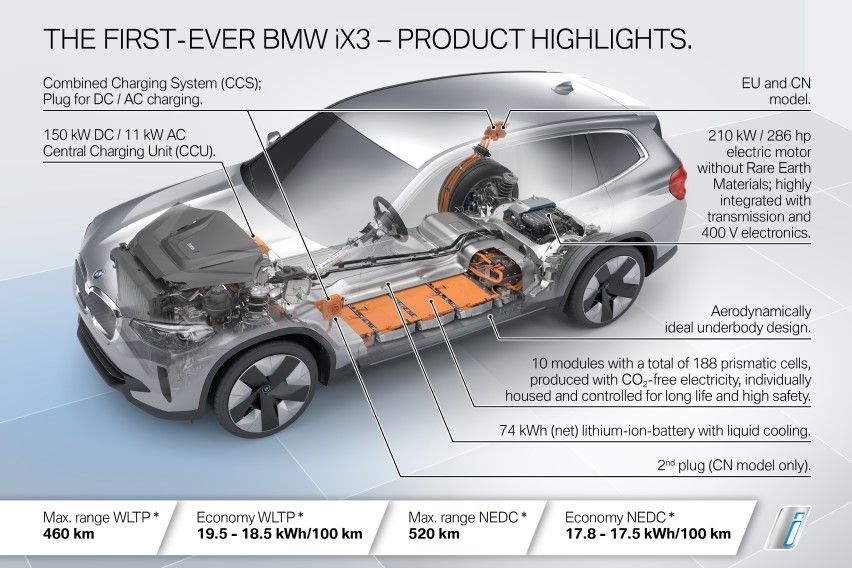 The iX3 also captures energy to recharge the battery in multiple ways such as regenerative braking and coasting. Power is sent to the rear wheels, and adaptive suspension is available as standard.

BMW didn’t announce a dual-motor all-wheel drive version forthcoming for the iX3, which may put it at a disadvantage against its competitors like Audi e-tron, Jaguar I-Pace, and others that offer all-wheel drive.

Should the car run low on power, the iX3’s  battery can be recharged to 80 percent capacity in 34 minutes as long as 150 kW DC fast-charger is used. If in a pinch, an iX3 driver can muster a 100km driving range from a 10-minute charge.

A 11kW AC charging is also available for charging via a home wallbox, when time isn’t of the essence.

Inside, premium interior ambiance with model-specific accents welcomes the iX3’s occupants. The user-friendly, variable-usage cabin readily provides a high level of comfort for five people regardless of the journey’s distance. For those hauling cargo instead of passengers, load capacity can be expanded from 510 liters to as much as 1,560 liters when the rear seats are folded down.

The 2021 BMW iX3 starts selling in many western markets beginning the middle of next year. The company will release more specs and pricing details closer to the launch date.

BMW Teases All New Electric i4