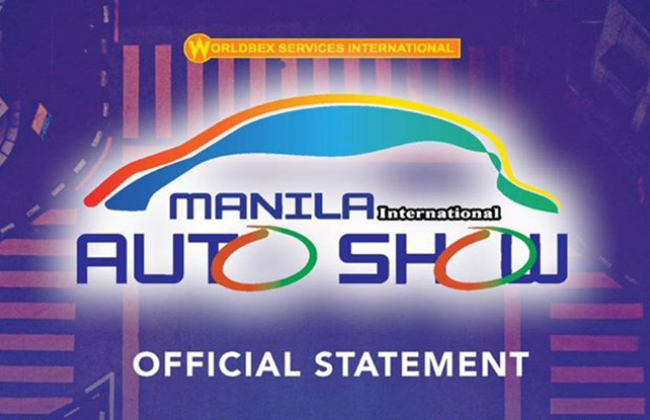 For those of you who are excited to attend the Manila International Auto Show for 2020, we hate to be the bearer of bad news but, MIAS will be postponed until further notice.

The event is postponed due to the recent outbreak of COVID-19. As a safety precaution, Worldbex, as well as MIAS’ organizers, decided that the best course of action would be to postpone the four-day car show.

“In light of the recent turn of events concerning COVID-19, which has led the Philippine government to declare a state of public health emergency, the management of Worldbex Services International has come to the decision to temporarily postpone MIAS (Manila International Auto Show) 2020,” the organizers said in a statement.

MIAS was previously slated April 2 to 5 at the World Trade Center.

"The decision, the statement said came upon after extensive and careful consideration of the current situation alongside our commitment to cooperate with the government's efforts to contain the spread of COVID-19. We humbly ask for your understanding in these trying times."

"We want to thank everyone who has taken part in the preparations for MIAS 2020 and those who have expressed their commitment and support for our endeavors and would like to assure all concerned that the event will be held at a later date when the public's safety can be assured. For now we hope for everyone's continued well-being and safety.”

The recent COVID-19 outbreak has also caused the 2020 Geneva International Motor Show to be cancelled, causing the automakers that were supposed to exhibit their vehicles at the show to just release their vehicles via internet premieres. But on the bright side, MIAS organizers promise that the show will be held at a later date instead.